In September 2017, the City of Mesquite mailed notices of intent to annex to around 500 property owners on 8,795 acres located in Mesquites' ETJ in Kaufman County.

At their Oct. 16 meeting, they voted to reduce the size of the area, removing almost all properties with homes. During their Oct. 23 pre-meeting, council informally approved reducing the area further, down to 3,657 acres, leaving about 17 homes affected in Kaufman County. Most of these homes are on the S. side of FM 2757, from East of Overlook Ln to FM 741. Mesquite council has expressed interest in annexing the "south" corners at FM 2757 & FM 741 for its future commercial potential.

During their Nov. 06 pre-meeting, staff presented a map of Area II, previously AA04, in which land to the south and west of the properties adjacent to FM 2757 (described as "legacy farmland" in the Oct. 23 pre-meeting) was still included, along with an additional tract. During the regular meeting, Council-member Boroughs moved to exclude the properties W. of Lawson Rd, and properties along 2757. The motion failed for lack of a second. Then the council approved this map as shown earlier, not excluding the legacy farmland. We contacted Mesquite staff and were told council did not accept the change during the Oct. 23 meeting; we replied asking when the council reversed their consensus and have not received a response.

Mesquite Mayor Pickett began the Nov. 13 public hearing stating that on Friday the city was restrained by Kaufman County District Court from proceeding with the Kaufman County annexation, and it had not yet been over-turned, so the hearing would only be considering the Dallas County portion of the proposed annexation.
There were ten people who spoke during the public hearing, two from Mesquite were in favor of the council, all the others were opposed to the annexation.
During the Nov. 14 meeting, the Mesquite Council removed the two items covering authorizing the City Manager to execute the Development Agreements and annexing the 5.714 square miles from the consent agenda, then moved to "postpone" the items.
The Temporary Restraining Order (TRO) that was referenced on Nov. 13 was the result of work done by Tracy Gray at Guest and Gray Law Firm, in concert with State Rep. Lance Gooden. On Nov. 14 Ms. Gray announced that Mesquite's appeal to the TRO had been denied, and an additional TRO covering the Dallas County portion had been granted and delivered to the city.
Hearing dates are Nov. 20 for the first TRO, and Nov. 28 for the second. TRO's are only valid for 14 days.
There may still be time for Mesquite to proceed with the annexation before Dec. 1 if the Nov. 28 hearing is in their favor - they have indicated they will continue to fight to move forward.

Updates: The Kaufman-county-only TRO was not extended, but the second TRO covering Dallas and Kaufman counties was, on Nov. 28, extended until Dec. 11. Attorney Tracy Gray stated Mesquite has indicated they plan to file a motion questioning (plaintiffs) standing to file suit and whether they could apply it retroactively, which she does not believe there is case law to support. She also stated "this is a very good day." 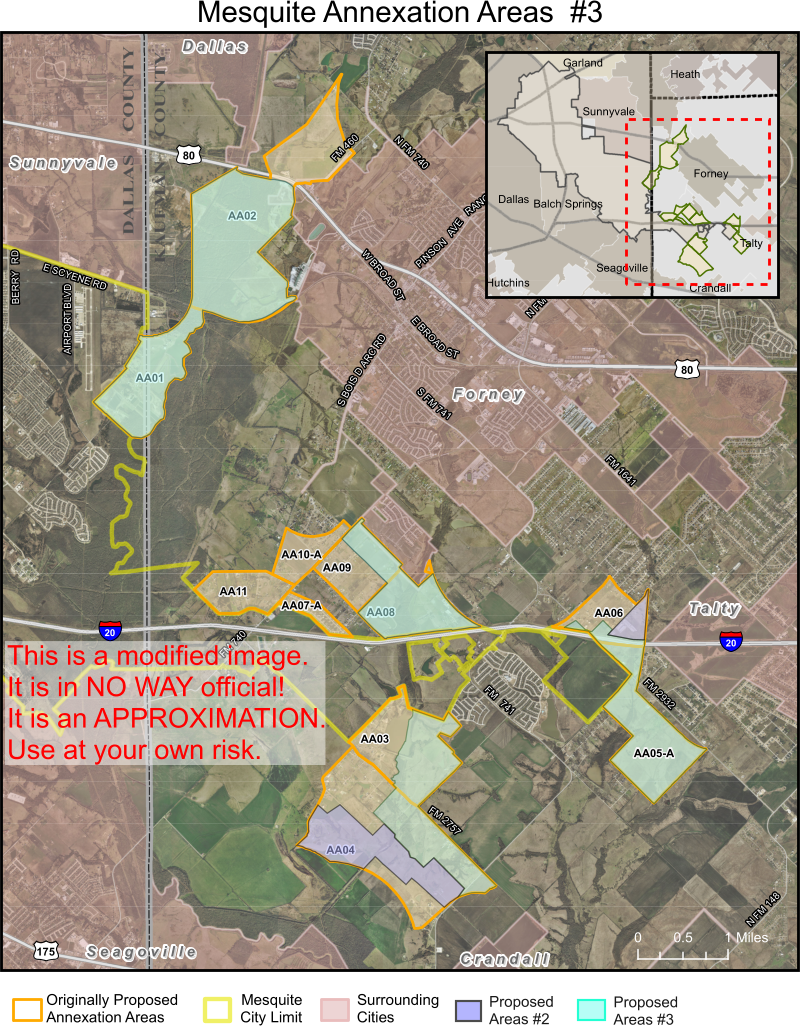